Will Shiba Inu Go Up? 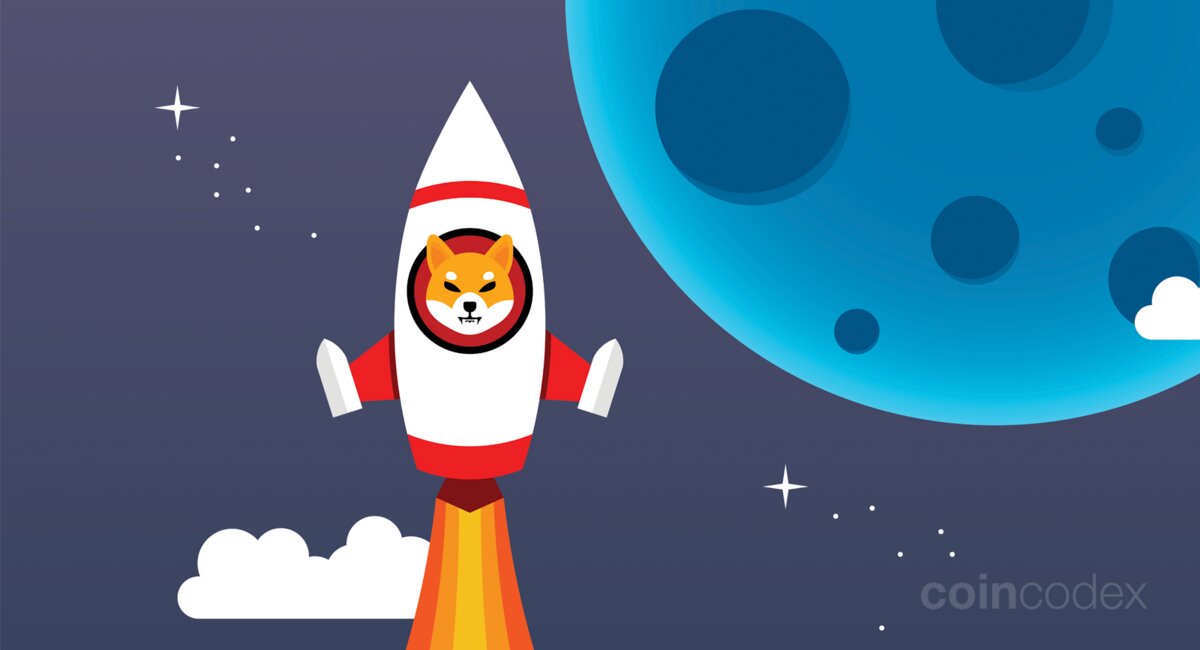 The Shiba Inu cryptocurrency made a massive splash in 2021, when the once obscure coin displayed one of the most explosive rallies in the history of the cryptocurrency markets. The coin, which had largely been ignored since its launch in the summer of 2020, suddenly began rising in the spring of 2021 and peaked at a massive market capitalization of $40 billion in October 2021.

Following the peak in October 2021, the Shiba Inu price has mostly been heading downwards. While SHIB still retains an impressive market capitalization of $5.7 billion at the time of writing, the token is down about 88% from its all-time high. Naturally, this has left many SHIB holders asking themselves: “Will Shiba Inu go up?”

SHIB is dismissed by some crypto market participants due to its meme token branding. However, it’s worth pointing out that Shiba Inu’s drop from its all-time high prices is comparable to the drops seen by many well-respected crypto projects. For example, both Avalanche’s AVAX and Polkadot’s DOT have both seen an almost identical decline from their all time highs.

We’ll be taking a look at Shiba Inu’s future prospects to see if SHIB will go up in the coming months and years. Before we explore whether Shiba Inu can return to its former glory, however, let’s quickly refresh our memories about this popular crypto project.

What is Shiba Inu?

Shiba Inu (SHIB) is a cryptocurrency that is issued as a token on the Ethereum blockchain. It utilizes the ERC-20 standard, which is a common way for issuing fungible tokens on Ethereum. Shiba Inu was launched in August 2020 by an anonymous developer using the pseudonym “Ryoshi”. Another important figure in the Shiba Inu story is “Shytoshi Kusama”, who serves as the project’s lead developer.

One of the defining features of Shiba Inu is its massive token supply. The initial supply of SHIB was a whopping one quadrillion coins, although a large portion of the supply was gifted to Ethereum’s inventor Vitalik Buterin (who is not affiliated with the project). Buterin later sold some of the SHIB he received to fund charitable donations, and burned the rest of his SHIB tokens.

When launched, Shiba Inu was presented as “the Dogecoin killer”. Essentially, it was conceived as a meme token that would incorporate features made possible by Ethereum, such as decentralized finance.

The project didn’t catch on immediately, but was found by crypto speculators once Elon Musk’s endorsements of Dogecoin resulted in a speculative frenzy for DOGE. Speculators began buying up SHIB in the hopes of catching “the next Dogecoin”, and many of them were successful in doing so.

Will Shiba Inu go up?

At the time of writing, Shiba Inu is trading at $0.0000103 and has a market capitalization of $5.68 billion, making it the 17th largest crypto asset by market cap.

Making a Shiba Inu coin price prediction for 2023 is made difficult by the fact that SHIB has only been around for a short period of time. The SHIB coin was launched in August 2020, and wasn’t really a relevant player in the crypto market until early 2021.

This means that there’s simply not a lot of historical data that would give us an idea of how the SHIB markets tend to perform over a longer time period. For example, if we take a look at an older cryptocurrency such as Bitcoin, patterns such as 4-year halving cycles give us a better idea of how the BTC markets could perform.

Reasons why Shiba Inu could go up

One of the toughest tasks for any cryptocurrency projects is simply getting its name out there and reaching a large number of people in the cryptocurrency community. Shiba Inu has already succeeded on this front, as it’s one of the largest cryptocurrencies by market cap and is listed on virtually all of the major cryptocurrency exchanges. Whether you’re using Binance, KuCoin, Kraken, OKX or Coinbase, you can trade SHIB at any time.

SHIB is a highly popular token – it’s held by more than 1.2 million addresses on the Ethereum blockchain. There’s also many users that hold all of their SHIB token holdings on cryptocurrency exchanges, so the real number of SHIB holders is even larger than 1.2 million.

One of the biggest reason for SHIB’s popularity is its low price per unit, which makes it appear cheap. The average person can quite easily buy hundreds of millions of SHIB tokens, which has made the token attractive to some. In reality, of course, users should be evaluating a token’s market cap and not its price, but the fact remains that the psychological “cheap coin” effect can sometimes be very real.

The downside of Shiba Inu’s popularity is that there might not be as much room for growth left as some SHIB holders might be hoping.

While Shiba Inu can rightfully be described as a meme token, it does have a team of developers that are trying to give the token improved utility. Perhaps the most notable project from the Shiba Inu team is Shibarium, a layer 2 scaling solution that utilizes BONE, a token related to SHIB.

According to developers, the Shibarium blockchain platform will be focused on offering cheap and fast blockchain transactions for decentralized applications, especially in the gaming and metaverse sectors. Each transaction on the Shibarium platform will burn SHIB tokens, which will contribute to reducing the supply over time, potentially contributing to making each SHIB token more valuable.

The Shiba Inu ecosystem also includes the ShibaSwap decentralized exchange, as well as the Shiboshis NFT collection. There are also plans for a Shiba Inu-themed metaverse that would provide play-to-earn opportunities.

If the Shiba Inu team impresses with its projects like Shibarium and the cryptocurrency market also turns more bullish overall, that could create a perfect storm to result in another bull run for SHIB.

To put it simply, the Shiba Inu project hasn’t yet delivered anything innovative from a technological perspective. The team’s projects mostly focus on crypto trends that are already well underway – ShibaSwap came well after the stunning success of Uniswap and the Shiboshis NFTs arrived relatively late during the 2021 NFT craze.

In addition, while the Shiba Inu team is close to releasing the Shibarium layer 2 platform for Ethereum, it remains to be seen if Shibarium actually brings anything new to the table in terms of technology. After all, the layer 2 space is already quite crowded with powerful platforms like Optimism, Arbitrum, zkSync and many others.

One of the main reasons for Shiba Inu’s meteoric ascent was that crypto speculators were looking for the “next Dogecoin” after DOGE saw an incredible price surge in the spring of 2021, and Shiba Inu emerged as a viable candidate. It remains to be seen whether Shiba Inu’s appeal as a meme coin has staying power, or if other meme coins will come to surpass it in the future.l

When considering some of the popular price targets for SHIB, holders should probably temper their expectations. For example, we often see discussions on social media platforms about whether it’s possible for Shiba Inu to hit $1. To put it simply, it’s extremely unlikely and probably close to impossible for SHIB to reach such a price.

It’s also unlikely that SHIB will ever reach a penny. Considering the current supply of SHIB tokens, a price of $0.01 would imply a market capitalization of 5.89 trillion for SHIB. To put this number in context – the highest the total cryptocurrency market cap has ever been is $3 trillion.

Technical analysis shows that Shiba Inu could see severe up-and-down movement in the next year, underlined by a trend to the upside.

According to our SHIB price prediction as of January 2023, SHIB could see significant gains in 2023. Currently, the price prediction by CoinCodex is estimating that SHIB will increase in price to $0.00003547 in one year, which would represent a price increase of more than 3x. The 6-month prediction is similarly optimistic, forecasting a SHIB price of $0.00002397.

At the moment, Shiba Inu is positively correlated to to Yearn.finance, Kusama, Polygon, VeChain and MultiversX. Meanwhile, it has the lowest correlation with UNUS SED LEO, Nexo, Frax, Dash and Bitcoin SV.

The Shiba Inu coin’s future will likely depend on how Bitcoin and the rest of the cryptocurrency market performs in the future. The SHIB markets are still primarily driven by speculative demand, and SHIB will likely require an environment where crypto investors are comfortable with taking big risks before it can grow significantly.

Of course, there is also a possibility that the Shiba Inu project excels with the delivery of the Shibarium layer 2 platform for Ethereum. If the platform sees a lot of activity, there could be a significant amount of SHIB tokens burned, which would make the token a more attractive asset to hold.

The upside of Shiba Inu is limited by the fact that it already has a significant market capitalization, and is already widely available to crypto investors – in other words, anyone that is interested in owning SHIB has already had the opportunity to do so. The coin has already hit major milestones such as being listed on Binance and Coinbase, so it might be difficult for SHIB to find catalysts for major price rallies in the future. Despite this fact, Shiba Inu is still one of the best crypto coins under 1 cent to buy in early 2023, primarily thanks to its growing ecosystem.

So, will Shiba Inu go back up? It’s certainly possible, but it will take the proper crypto market conditions for it to happen. In the meantime, check out our list of the top meme coins that could explode next.

Cryptocurrencies to watch for the last weekend of January 28-29

Gnox (GNOX), Cardano (ADA) And VeChain (VET) Could Outperform Ethereum (ETH) By The End Of 2023