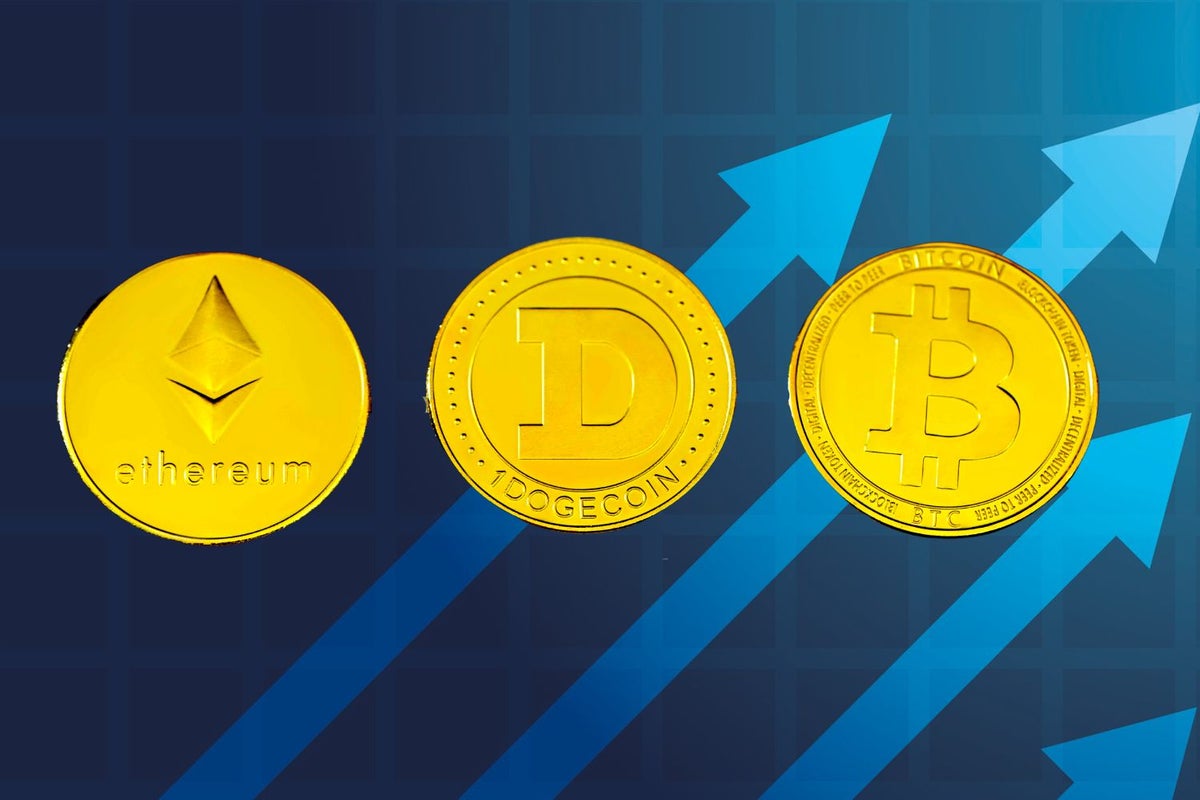 Dogecoin DOGE was blasting almost 7% higher during Monday’s 24-hour trading session, in tandem with the S&P 500, which was popping up over 1%.

The Shiba Inu-themed crypto was showing strength in comparison to Bitcoin BTC/USD and Ethereum ETH/USD, which were trading more moderately higher by 1% and 3.7%, respectively.

The three cryptos have shown strength compared to the general market since the end of December, trading in steady uptrends, although with a lower level of volatility than is usually expected. In contrast, the S&P 500 chopped mostly sideways during that time frame, except for Friday, when the index broke up from the horizontal pattern.

Dogecoin’s spike higher caused the crypto to regain support at the 200-day simple moving average (SMA), while Ethereum was working up higher toward that area.

The Bitcoin Chart: Bitcoin reversed into an uptrend on Dec. 30. Since then, the crypto printed a higher high at the $16,988 mark on Jan. 4 and a higher low the following day at $16,670.82. During Sunday and Monday’s 24-hour trading sessions, Bitcoin was spiking up above the most recent higher high, but hasn’t yet flashed a signal the temporary top is in.

Eventually, Bitcoin will print a bearish reversal candlestick, such as a doji or shooting star candlestick, which could indicate the next higher high is in, and a retracement will take place. When that happens, bullish traders will want to see the crypto bounce up off the eight-day exponential moving average.

During Monday’s 24-hour trading session, Ethereum was charging higher but, like Bitcoin, the crypto hasn’t shown signs the next higher high has occurred. If Ethereum continues to push higher over the next few days, the crypto is likely to find resistance at the 200-day SMA.

The Dogecoin Chart: Dogecoin started trading in an uptrend on Dec. 30 and printed its most recent higher high on Jan. 5 at $0.075 and the most recent higher low was formed at the $0.069 mark the next day. On Monday, Dogecoin was charging up toward the 50-day SMA, which may act as resistance if the crypto continues to climb higher.

If Dogecoin closes the trading day near its high-of-day price, the crypto will print a bullish Marubozu candlestick, which could indicate higher prices wil come again on Tuesday. The second most likely scenario is that Dogecoin forms an inside bar pattern to consolidate Monday’s big move north.