Bitcoin may plunge to $13,000 on crypto exchange turmoil – News 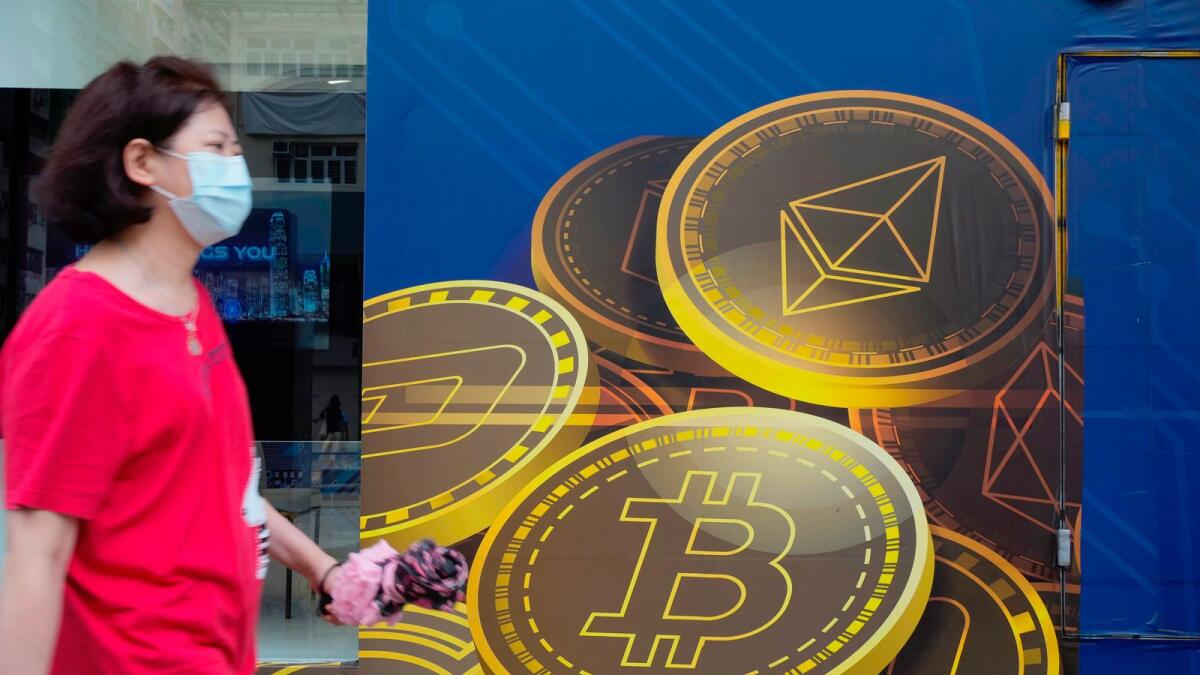 Analysts at JP Morgan have predicted that the shockwaves of a collapse of FTX could lead Bitcoin to tumble to 80 per cent below its all-time peak of $70,000 in November 2021 as firms are hit by a “cascade of margin calls.”

A woman walks past an advertisement for the Bitcoin cryptocurrency in Hong Kong. Bitcoin once again slipped below $17,000 on Saturday to an intraday low of $16,543.48, less than 24 hours after residing at a high of $17,480.18, as it was reported that a hack on FTX had taken place. — AP

Bitcoin could tumble to as low as $13,000 amid the persisting crypto market turbulence sparked by the implosion at the digital asset exchange FTX – a unicorn startup that was recently valued at $32 billion — is just the latest in a series of dismal news for investors in bitcoin, ethereum and other digital assets, JP Morgan has warned.

The crypto exchange was plunged into fresh trouble when the world’s biggest exchange and its main rival Binance walked away from a rescue deal.

FTX had struck a non-binding deal to sell itself to Binance amid a major liquidity crunch, but Binance reportedly took fright at the state of the exchange’s books and aborted the takeover.

Analysts at JP Morgan have predicted that the shockwaves of a collapse of FTX could lead Bitcoin to tumble to 80 per cent below its all-time peak of $70,000 in November 2021 as firms are hit by a “cascade of margin calls.”

A Bank of America report suggests that Bitcoin has faced the fifth-worst collapse of assets in financial history, and by far, the biggest since the 1970s. In the past one year alone, the world’s most valuable cryptocurrency has shed over 77 per cent of its value. The crash is thought to be much steeper and greater in scale than the one faced by the likes of Mississippi Co, South Sea Co and Roaring 20s.

Crypto analysts said the fall becomes precarious, given that Bitcoin accounts for more than 41 per cent of the crypto market and the previous instance it plunged to such depths was at the peak of the pandemic two years ago.

However, there are optimists who believe that Bitcoin will recover from the FTX “black swan event” just like other setbacks.

“Investors don’t appear to be concerned about the impact of FTX on Bitcoin’s future,” said Alyse Killeen, founder and managing partner of venture firm Stillmark.

Killeen added that the drop in bitcoin prices that was occurring even before the FTX meltdown is a sign that cryptocurrencies are not yet a true hedge against inflation and a stronger dollar.

Trading team Stockmoney Lizards argued that the week’s events were actually nothing new for Bitcoin. Despite falling 25 per cent in days, Bitcoin is not doomed as a result of the insolvencies impacting FTX, Alameda Research and possibly other major crypto companies.

“The history of BTC is lined with such events and the market will recover from it as it did in the past.”

The turmoil at FTX is set to shake the industry after a sizzling year in the market that has seen over a trillion dollars wiped off its value. FTX, led by Sam Bankman-Fried, had been regarded as one of the more stable companies in the sector and had ridden to the aid of a number of firms this year with emergency loans as they were rocked by a so-called crypto winter.

FTX is now facing an $8 billion shortfall and teetering on the edge of collapse without support. The downturn in the market this year has already wiped out major players including digital lender Celcius and crypto hedge fund Three Arrows Capital.