BNB Chain vs Ethereum: How Do They Compare? 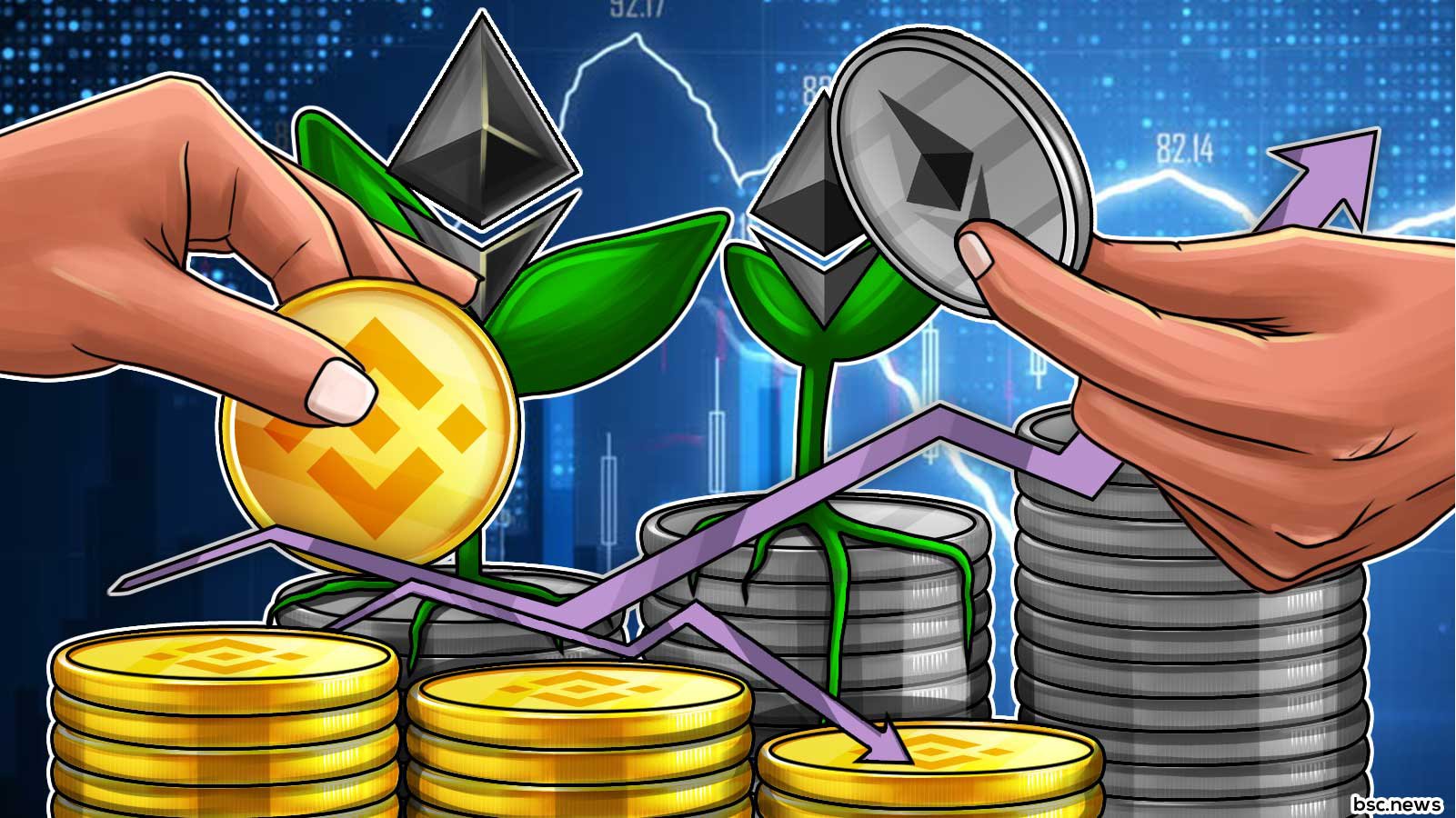 Important distinction between BNB chain and Ethereum – the two most popular and utilized ones in the crypto space.

BNB chain and Ethereum are the two most popular and utilized blockchains in crypto. However, they have distinctions that not many people know about. Understanding these distinctions could make a crypto investor’s journey much easier.

Now that the naming of the networks is clear enough let’s look into their prospects. BNB Beacon chain, formerly known as Binance Chain, was developed in 2019 to facilitate decentralized trading and host BNB tokens. However, it has limited flexibility and scalability, which necessitated the Binance Smart Chain network’s development.

The BNB chain was developed as a way to introduce smart contracts similar to the Ethereum network – without causing congestion in the Binance ecosystem. It was built independently from the influence of the BNB Beacon Chain, meaning that it would still run even if the latter was compromised. It also has other perks, like its compatibility with Ethereum Virtual Machine (EVM), which allows developers to use Ethereum tools and build DApps.

The BNB Chain also has an incentive known as the Binance Smart Chain Build Reward Program. This program is there to encourage developers to come up with new solutions. It offers up to $5M in BNB to be paid back to developers in proportion to the gas fees paid for their contracts.

Ethereum was built by its core developer/founder Vitalik Buterin. He started by publishing its white paper in 2014. He envisaged a blockchain network that would allow developers to develop any program they wished. Therefore, he developed the Ethereum network and the Ethereum Token as the fuel to the network.

His innovation is the one that brought smart contracts and layer 2 solutions to the crypto sector. This qualifies Vitalik to earn the title – ‘father of DeFi.’ Ethereum then opened up the world of possibilities to the crypto space as projects like DAOs (Decentralized Autonomous Organizations) got birthed.

Ethereum has grown to be the first choice of DApp developers due to having a large pool of tools. One of the reasons why developers choose to build on Ethereum is solidity, the program used to develop Ethereum smart contracts. The network has other debuggers, unit test frameworks, and coverage tools.

Comparison Between the Networks’ Native Tokens

Both Ethereum and BNB Chain networks have native tokens used to power them. These tokens are used for different purposes in the chains, the most common being paying gas fees.

The coin is also supported by the BNB Chain for core roles like paying gas fees, making it a native token of the network. Now developers can use the token to pay network fees or create new tokens. Users can also use it on BNB chain DApps.

The Ethereum network has a token known as Ether (ETH). The token is primarily used to pay fees on the network. It is also the second largest coin in the world by Market Capitalization. This shows that it is one of the most trusted crypto assets in the market at the moment. Developers also use it when building their DApps and tokens on the Ethereum network.

The coin’s value has been surging in the past years and rivaling Bitcoin. The coin seemed to be building on the shortcomings of Bitcoin. It introduced smart contracts and now it is transitioning from a Proof-of-work mechanism to Proof-of-Stake. That transition will make the Ethereum chain more efficient and faster.

Despite being the newer blockchain, the BNB chain always tops Ethereum in the number of daily active addresses. While this metric can be argued against since BNB Chain has an advantage in that every Binance user gets a unique address on the network. It is more helpful to compare the number of transactions handled by each blockchain.

BNB Chain has much higher usage than Ethereum, even during a dip. These results remain consistent, although Ethereum’s value is surging as the upcoming Merge nears.

The other reason BNB Chain may have significantly higher addresses is that it is generally faster and has lower fee rates. Also, it has its versions of tokens originally developed for the Ethereum network. For instance, Shiba Inu, one of the most popular meme coins, was originally developed as an ERC-20 token.

However, a BEP-20 token of the coin was also made. Many investors may settle for the BEP-20 version due to lower transaction fees.

The BEP-20 standard is fully compatible with ERC-20 and gives BNB Chain developers similar flexibility that they enjoy on the ERC-20 standard. However, the advantage that BEP-20 has is that it is interoperable with the BEP-2 standard used for BNB Beacon Chain. That means the contracts on the two networks can communicate with ease.

ERC-20 standards were introduced in 2015 and are the most common Ethereum standard currently being used. It is mostly used for the creation of fungible tokens on the network. This standard has earned a name in the crypto space for introducing smart contracts.

A consensus mechanism refers to the mode through which a network’s nodes reach a consensus on the data submitted to a block. There are several ways through which a blockchain reaches consensus, including Proof-of-Work (PoW), Proof-of-Stake (PoS), and Proof-of-Authority (PoA).

BNB Chain uses a hybrid consensus mechanism called Proof-of-Staked-Authority (PoSA). This mechanism adopts some popular attributes of the PoS, like stakers being the validators of the transactions on the network. However, the number of validators in the BNB Chain is limited. It supports 41 validators, unlike Ethereum, which currently has over 70K.

The network’s validators are selected from a set built on the BNB Beacon Chain and the basis of the top BNB token stakers. They are then propagated daily to the BNB Chain through cross-chain communication.

This hybrid consensus mechanism was chosen for the BNB Chain to enhance shorter block times and lower transaction costs. However, its shortcoming is that it compromises the decentralization of the network.

Ethereum was previously developed to work on a PoW consensus mechanism. However, it is in a transitional stage to Proof-of-Stake, which is a few days away. However, since it is still using PoW largely. We will cover both consensus mechanisms and how they function for the network. The first one is the current PoW mechanism.

This mechanism involves solving of Block hash for it to be included in the blockchain. The node that solves the hash correctly and first becomes the one to receive the reward from the transaction fees. That node must also prove to the verifiers that it expended a given amount of work in solving the hash of the block.

This process is messy, lengthy, and inefficient. It made Ethereum perform poorly against other networks. For these reasons the Ethereum Community decided to propose and develop the PoS mechanism. The incoming PoS mechanism will allow key Stakers to validate the network’s transactions instead of competing like miners in the PoW mechanism.

It is expected to increase the network’s speed by around 10% after it goes live for the first time. Although many network users will not feel the difference in the speed of the network, the validators will benefit from a 99% reduced power usage. That means the efficiency will be much higher.

The transaction speed, gas fees, and efficiency of the networks rely on the consensus mechanism and scalability. They always seem to be affected by the same aspects and yield similar results, which is why we will cover them together.

BNB Chain is built on a faster PoSA consensus mechanism, making it more efficient as its verification process is more straightforward than other mechanisms. That gives it an edge over Ethereum, which is often affected by congestion due to slow transaction speeds.

BNB Chain’s PoSA takes 3 seconds to verify a transaction, much higher than Ethereum’s 13-15 seconds on the PoW consensus mechanism. The upcoming PoS mechanism will also make Ethereum complete the transactions at around 10 seconds which is still much lower than BNB Chain.

Currently, BNB Chain is more efficient than Ethereum, given that it uses a PoSA mechanism that does not need heavy mining equipment. That means the power usage per transaction is much lower than Ethereum. Carbon footprint is also much lower, making it is the more efficient choice between the two networks.

The Ethereum network currently relies on the PoW mechanism where miners need to compete in verifying a transaction. That means a lot of energy gets wasted by the miners who start a verification process but are beaten by faster ones.

The mining rigs used for the process also consume a lot of electricity. Comparing the resources used in running the network and its output, Ethereum lags behind in efficiency. Transaction speeds are much lower than BNB Chain.

However, things are about to get better for Ethereum as developers take steps to improve its efficiency. Founder Vitalik Buterin said that developers are working tirelessly to make the network more efficient and faster.

Scalability in cryptocurrency is the ability of a network to handle user growth and process a large number of transactions in a limited amount of time. A network must always increase its throughput without sacrificing either decentralization or security.

This is one of the issues with the Ethereum network at the moment. It cannot handle too many transactions per second due to network congestion. The network’s gas fees and transaction speed are significantly affected.

Currently, the network is operating at under 50 TPS but with a target of hitting 100K TPS once it transitions to Ethereum 2.0. These numbers are much lower than BNB Chain’s 300 TPs.

BNB Chain and Ethereum networks both have pros and cons in their favor. However, looking deeper into the chains is advisable when you want specific results. If you are a developer you should research more on development costs and expected returns.

If you are an investor, focus your research on transaction costs, efficiency, and time taken to complete the transactions. Additionally learn how to DYOR before investing in the crypto space.